Breaths are not nose tip, touching, or feeling. Breaths are long or short wind flowing at nose tip.

But you are focus on clearing appearing breaths at somewhere of those, so wherever of them is OK.

The other touching points such as in side the nose or lung is over width for clear focusing on breath and easily to get Restlessness (uddhacca), so appearing breaths on somewhere at the nose tip is the best choice for the meditation.

Day-to-day meditation and the quiet mind


All the wisdom of one who has attained (appanā), is, wisdom by means of development.

The meditation is the cessation of all suffering, not only the present suffering. If the meditation is not strong enough, it can ceases only the present suffering and keeps the future suffering going on.
Daily life Vipassanā is good and the practitioner should do it, but Nibbāna is the best, so only doing good is not enough to enlighten Nibbāna.
See KN Paṭisambhidāmagga, Visuddhimagga, DN Mahāsatipaṭṭhānasutta.
at 11:01 AM No comments:

Email ThisBlogThis!Share to TwitterShare to FacebookShare to Pinterest
Labels: Meditation

How to manage overthinking?

Overdue thinking and late thinking can stop by planning.

Over five-strings thinking can stop by upacara/appana-jhana and can cease by vipassana.

Overall suffering can cease by Nibbana. And the practitioner can attain Nibbana by adhisila+adhicitta+adhipanna.

After the absorption, the practitioner can say he is the obtainer of the first Jhana if the five hindrances still not arise instead of Jhana practice.
If that obtainer can't absorpt the first Jhana, but he has not an arising of the five hindrances, we still can call him as the obtainer of the first Jhana because he is in access concentration state, Upacāra-Jhāna, of the absorption concentration state, Appanā-Jhāna, which certainly going to arise if he still can keep the access concentration go on continuously.
The five hindrances are a major one important keyword of this question. Focus on it.
At the first time absorption, Jhana arises only one moment, but it is going to take the longer duration when the practitioner practice that Jhana to be the mastery skillful expert, Vasī.
It's like when the practitioner practices the weight training, no one can hold up the weight in long duration, but the practitioner can hold the weight up longer and longer after training the weight more and more.
The path of purification, Pathavikasinaniddesa:


Sā ca pana ekacittakkhaṇikāyeva.
Ñ(IV,78): But that (first time of the first Jhana) absorption is only of a single conscious moment.
Sattasu hi ṭhānesu addhānaparicchedo nāma natthi paṭhamappanāyaṃ, lokiyābhiññāsu, catūsu maggesu, maggānantaraphale, rūpārūpabhavesu bhavaṅgajjhāne, nirodhassa paccaye nevasaññānāsaññāyatane, nirodhā vuṭṭhahantassa phalasamāpattiyanti.
Ñ: For there are seven instances in which the normal extent [of the cognitive series] does not apply. They are in the cases of the first absorption, the mundane kinds of direct-knowledge, the four paths, fruition next after the path, life-continuum jhāna in the fine-material and immaterial kinds of becoming, the base consisting of neither perception nor non-perception as condition for cessation [of perception and feeling], and the fruition attainment in one emerging from cessation.

The path of purification, Vasī:

The three-fold is used in Tipitaka when the listener asking for the step by step teaching, but the eight-fold is used when the listener already trained and asking "why I still not enlightened after trained the three-fold?", so it's called "the higher three-fold training", not only "the three-fold".
The three-fold is the training, Sikkhā. The sequence training is required for the begīnner practitioner to train something. No weight trainee can hold the 100 kg up at first. See Sutta. Ma. U. Gaṇakamoggallānasuttaṃ. Buddha also blames the skipper step as the blank attainer, Moghapurisa, in MN KīṭāgiriSutta and AN Sattakanipātā DhammaññūSutta as well.
The eight-fold is the noble training to enlighten the noble cessation, Nirodhāya AriyaMaggaSikkhā. It's the top of training and only the trained people can use at first, i.e. King AjātaSattu who has a good education person, or Aññākoṇḍañña. Most people can't enlighten even listened to the four noble truth thousands of times. So, after one practiced above three-fold, and he still not enlightened, he is going to asking for "what was wrong? Why I who training very hard still be an ordinary person?" then the Buddha will teach him the higher three-fold that starting with the right attitude, SammāDiṭṭhi in AriyaMagga, ie. Aññākoṇḍañña who ordained a long time ago before he was going to enlighten in SN DhammacakkappavattanaSutta which focusing only the noble eight-fold path.
The practitioner is training the three-fold for the perfect right attitude, so Buddha teaches the trained practitioner the right attitude especially if the trained practitioner still not enlighten after attained Jhāna.
This is why the noble truth, AriyaSacca, often appears at the end of Sutta, such as MN MahāsaṭipaṭṭhānaSutta, DN SāmaññaphalaSutta.
Therefore, the practitioner should practice following the sequence of threefold training then after attained Jhāna, but the practitioner still not enlighten the cessation, the practitioner should focus on practicing the right attitude in four noble truth.
However, the practitioner should practice following the qualified master to keep the time of training. Most of the alone readers died before enlighten because they lose most of the time in discussing Tipitaka. I just explain the thinking of the master. I do not advise you to practice or read Tipitaka without the support of the qualified master.
If one wants to understand this answer clearly, reciting and memorizing Suttas which I quoted above are required because the answer has already appeared in both Tipitaka's and Atthakatha's Pali context like Buddha ordered "He proclaims a Teaching that is good in the beginning, good in the middle, and good in the end, with the right meaning and phrasing." The reader should use the same method to understand entire those beginning middle and the end "six further qualities he should not live independently: ... when the two pātimokkhas are not perfectly known to him in their entirety, with all their divisions and their whole course, and with the entire discussion according to the single rules and to the single parts of each rule."
It is extremely easy to understand and deconflict the misunderstood of the only reader when one study Tipitaka follow to the ancient Tipitaka study system with the Jhana-attainer who recited and memorized of what he is teaching. It is harder but it is very useful. I recommend Pa-Auk. I know one Thai Tipitaka memorizer and he chose Pa-Auk to graduate his study.
at 6:27 AM No comments:

The vanished moment is hypochondria. It cannot pass or upload anything to the future although it still is able to cause new moment effects. 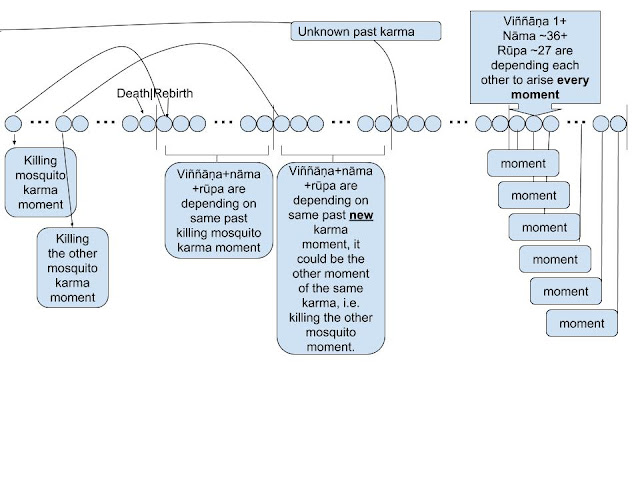 Kusala, wholesome, is an advantage mind and mental factors. It is the advantage because it must causes both present and future advantage resultants, KusalaVipāka.
Kusala can arise without Puññā, i.e. a boy gives a gift to a poor man just on demand, but Puññā can't arise without Kusala because Puññā without Kusala is the ignorant, Aññāṇa. Aññāṇa is the root of Akusalā, unwholesome, and causes the advantage resultants.
Paññā = understand the fact: causes&effects, the dependent origination, Paṭṭhāna.
Paṭivedha = Paññā.
Paṭivedha = understand through the fact relation: causes&effects.
Ñāṇa = Expert Paññā.
Dassana = View, Understood, Diṭṭhi (vision), Cakkhu (eye).
at 10:30 AM No comments: